You may have heard that Elixir has great Unicode support. This makes it a great language for distributed, concurrent, fault-tolerant apps that send poo emoji! 💩

Specifically, Elixir passes all the checks suggested in The String Type is Broken.

The article says that most languages fail at least some of its tests, and mentions C#, C++, Java, JavaScript and Perl as falling short (it doesn't specify which versions). But here I'll compare the languages I use most: Elixir (version 1.3.2), Ruby (version 2.4.0-preview1) and JavaScript (run in v8 version 4.6.85.31).

OK, but how does Elixir support Unicode so well? I'm glad you asked! (Ssssh, pretend you asked.) To find out, we need to explore the concepts behind Unicode.

Unicode is pretty awesome, but unfortunately, my first exposure to it was "broken characters on the web."

To understand Unicode, let's talk first about ASCII, which is what English-speaking Americans like me might think of as "plain old text." Here's what I get when I run man ascii on my machine: 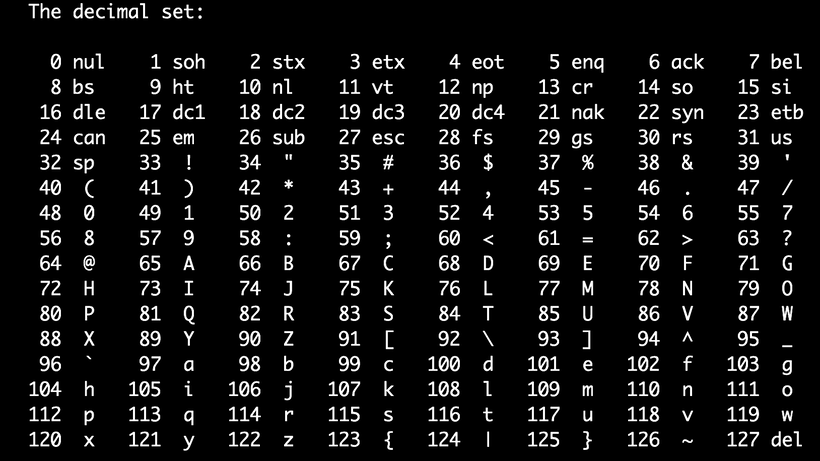 ASCII is just a mapping from characters to numbers. It's an agreement that capital A can be represented by the number 65, and so on. (Why 65? There are reasons for the numeric choices.) The number assigned to a character is called its "codepoint."

To "encode" ASCII—to represent it in a way that can be stored or transmitted—is simple. You just convert the codepoint to base 2 and pad it with zeros up to a full 8-bit byte. Here's how to do that in Elixir:

Since there are only 128 ASCII characters; their actual data is never more than 7 bits long, hence the leading 0 when we encode 'a'.

And that's fine as far as it goes. But we want to be able to type more than just these characters.

We want to type accented letters.

And this Han character that means "to castrate a fowl."

We want to type emoji for laughing, and crying, and kissing, and being upside down, and having dollars in our mouths.

In practice, Unicode is made by a standards body, so it's a political process, and some people say that their language isn't getting a fair shake. For example, in an article called I Can Text You A Pile of Poo, But I Can’t Write My Name, Aditya Mukerjee explains that Bengali, with about 200 million native speakers (more than Russian), can't always be properly typed on a computer.

Similarly, through something called the "Han unification," people who type Chinese, Japanese and Korean have been told, "hey listen, y'all are gonna have to share some of your characters to save space."

Or at least, that's how some of them interpret it. There is an article on the Unicode site explaining the linguistic, historical and technical rationale, which also says:

This process was well-understood by the actual national standards participants from Japan, Korea, China, and other countries, who all along have been doing the major work involved in minimizing the amount of duplicate encoding of what all the committee members fully agree is the same character.

As someone who doesn't write any of the languages in question, I can't really weigh in. But if saving space was part of the rationale, it does seem odd that Unicode has seen fit to include playing cards... 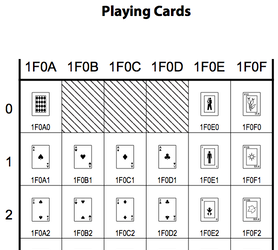 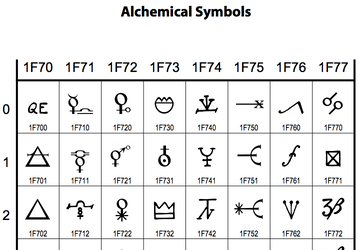 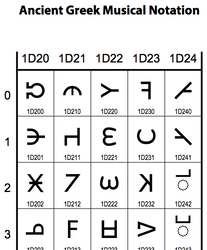 ...oh, and Linear B, which nobody has used for anything for several thousand years.

But for the purposes of this article, what's important is that Unicode can theoretically support anything we want to type in any language.

At its core, Unicode is like ASCII: a list of characters that people want to type into a computer. Every character gets a numeric codepoint, whether it's capital A, lowercase lambda, or "man in business suit levitating."

So Unicode says things like, "Allright, this character exists, we assigned it an official name and a codepoint, here are its lowercase or uppercase equivalents (if any), and here's a picture of what it could look like. Font designers, it's up to you to draw this in your font if you want to."

What can we do? One idea would be to always use, say, 3 bytes per character. That would be nice for string traversal, because the 3rd codepoint in a string would always start at the 9th byte. But it would be inefficient when it comes to storage space and bandwidth.

Instead, the most common solution is an encoding called UTF-8.

Each of those templates has some headers which are always the same (shown here in red) and some slots where your codepoint data can go (shown here as "x"s).

The four-byte template gives us 21 bits for our data, which would let us represent 2,097,151 different values. There are only about 128,000 codepoints right now, so UTF-8 can easily encode any Unicode codepoint for the foreseeable future.

To use these templates, you first take the codepoint you want to encode and represent it as bits.

Now let's see that number in base 2:

That's 14 bits long—too many to fit into the UTF-8 2-byte template, but not too many for the 3-byte template. We insert them into it right to left, and pad with leading zeros.

Is this what Elixir actually does? Let's use the handy IEx.Helpers.i/1 function to inspect a string containing ⏰ in iex:

This shows us that the string is actually a binary containing three bytes. In Elixir, a "bitstring" is anything between << and >> markers, and it contains a contiguous series of bits in memory. If there happen to be 8 of those bits, or 16, or any other number divisible by 8, we call that bitstring a "binary" - a series of bytes. And if those bytes are valid UTF-8, we call that binary a "string".

The three numbers shown here are decimal representations of the three bytes in this binary. What if we convert them to base 2?

Yep, that's the UTF-8 we expected!

Here's an example character for each of the UTF-8 templates.

The letter 'a' is encoded with a solo byte—a single byte starting with 0. The "roasted sweet potato" symbol has a leading byte that starts with four 1s, which tells us that it's four bytes long, then three continuation bytes that each start with 10.

Also, notice that the encoding for 'a' looks exactly like ASCII. In fact, any valid ASCII text can also be interpreted as UTF-8, which means that if you have some existing ASCII text, you can just declare "OK, this is UTF-8 now" and start adding Unicode characters.

The fact that each kind of byte looks different means you could start reading some UTF-8 in the middle of a file or a stream of data, and if you landed in the middle of a character, you'd know to skip ahead to the next leading or solo byte.

It also that means that you can reliably do things like reverse a string without breaking up its characters, measure the length of a string, or get substrings by index. In my next post, we'll see how Elixir does those things. We'll also learn why "noël" isn't the same as "noël", how to write comments that break a web site's layout, and why even Elixir won't properly downcase "ΦΒΣ".